Vopnafjördur - Iceland
Vopnafjordur covers an area of 598.5 km2 and was last subject to exploration in 1997.
​​​​​​​
​​​​​​​Exploration to date has been limited to low density stream sediment and rock chip sampling and this will be extended in 2019 by a mapping and grab sampling exercise over the key areas of interest identified in the earlier surveys. All work is essentially non-destructive in nature and will not involve machine-assisted removal of rock or vegetation. Fieldwork and subsequent analysis will be carried out in compliance with NI 43-101 with the aim of identifying areas for future exploration.
Location and Access
This 598.5 km2 area is located to the NE of Iceland at Vopnafjördur accessible by highway.

The range to the east of the area has a peak of 1251m. The topography of the area varies between low level and flat to steep, occasionally mountainous slopes. The area can be reached by road and gravel path. Areas that cannot be reached by road will be traversed by foot.
Exploration History
Exploration in Vopnafjordur was carried out by Malmis between 1991 and 1993 in the form of BLEG surveys and vein sampling The BLEG surveys returned somewhat inconsistent results with the 1992 survey returning more promising results than the 1991 and 1993 surveys. Despite this, samples taken mostly within a possible Caldera filling of a tertiary central volcano at Hellisheiði showed abundant sulphides. Vein sampling carried out at the same time showed significantly more promise with a number of veins showing significant Au enrichment. Follow up of the central volcano at the vein mineralisation found at Haugsá produced samples with a high of 447ppb Au and 90% of samples returning Au values above 10ppb. The mineralised veins in the area therefore clearly show widespread Au enrichment which warrants further investigation.

Follow-up work was carried out by Melmi in 1997, who carried out stream sediment and helicopter-assisted rock chip sampling in the Flateyjardalur, Bleiksmyrardalur, and Vopnafjordur areas. The rock chip sampling programme focused on areas of strong alteration, known quartz-carbonate-pyrite veining, and in selected structural settings. As with the earlier BLEG surveys, stream sediment samples returned largely low values; however, rock chip sampling identified anomalous antimony, selenium, and tellurium values in a rhyolitic centre in the north of the area.
​​​​​​​
​​The historical data has been insufficient exploration to define a current resource and the Company cautions that there is a risk further exploration will not result in the delineation of a current mineral resource.
2016 Field Program Geological Mapping
NAMA carried out an exploration program in 2016, that began with a historical data review and initial targeting of volcanic/intrusive centres and structures of interest. This was followed-up by traverse mapping of targets and their surrounding areas.
Grab Sampling
In addition to mapping, grab samples of mineralized rock, vein material, and altered material was sampled by hand and assayed by multi-element ICP-MS and fire assay to ascertain key major, trace, and precious metal contents. In addition, representative grab samples of country rock were also assayed by the same process to provide background levels for gold and any identified pathfinder elements.
Project Images 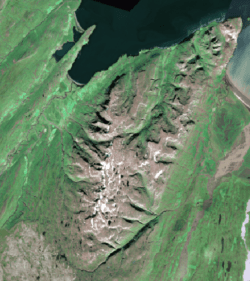 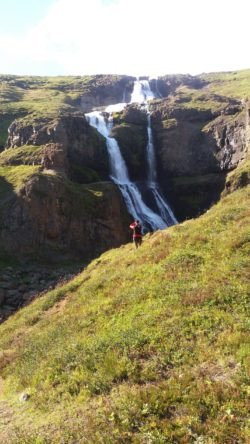 Öxnadalur - Iceland
This 1017.7 km2 area is located in the north of Iceland near the town of Akureyri. Peaks in the region reach 1538m above sea level, and there are few significant tracks throughout the majority of the prospect. Due to its northern location, it is more subject to seasonality with respect to the exploration of seasons.

Öxnadalur is located in northern Iceland, where calderas contain extensive rhyolite and low-temperature zeolite alteration. A considerable reconnaissance effort was affected here by Melmi (Fleming, 2006) in order to identify any potential gold occurrences. Of the 53 reconnaissance samples which were collected, 52 samples were at or below the detection limit of 3 ppb. One sample returned a gold assay of 22 ppb.

​​​​​​​Öxnadalur is an area with a mapped felsic central volcano that had not been explored in the previous work by Teck or by Melmi. In 2006, Melmi conducted a program of stream sediment sampling in most of the major valleys using roads, tracks, and foot-traverses for access. Rock samples were also collected where the alteration was encountered.

The historical data has been insufficient exploration to define a current resource and the Company cautions that there is a risk further exploration will not result in the delineation of a current mineral resource. 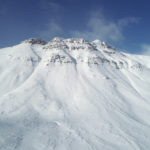 Thormodsdalur - Iceland
Thormodsdalur is located about 20km E of the city centre of Reykjavík, SE of the lake Hafravatn. The project has a long history dating from 1908, when a local lawyer, a businessman, and the poet Einar Benediktsson found a gold deposit that was investigated in the years 1908-1925. In 1911 with the help of a British company and again after WWI with the help of a German company, they dug four tunnels and did surface excavations that covered over 400m underground. Some ore was transported to Germany and historical sources reveal that reported gold values were 11-315g/t Au.

A geological study on the volcanic-hosted epithermal gold deposit done in the 1980s gave new life to the project when it suggested that many Au-Ag deposits of this class represent fossil geothermal systems. Geologists from Orkustofnun looked at the area from the theoretical perspective and found visible gold in cores from geothermal wells. They then compelled the government to create an entity around gold in Iceland, the entity was called Málmís.

Studies in 2005-2006 and 2013 indicate that mineralisation has been identified as a low sulphidation bander epithermal chalcedony-ginguro deposit.  Petrographic analysis of the vein material identified gold occurring in its free form and also as part of an assemblage with pyrite and chalcopyrite.
​​​​​​​
Petrographic and XRD studies show an evolution of the vein system from the zeolite assemblage to quart adularia and lastly to minor calcite. In the area, 32 core wells have been drilled for a total of 2439m. The Au grade varies from less than 0.5ppm to the maximum of 415.4 ppm.
​​​​​​​
The historical data has been insufficient exploration to define a current resource and the Company cautions that there is a risk further exploration will not result in the delineation of a current mineral resource.
Exploration Summary
The operation will commence with the drilling of six drill holes totalling ~795m, targeting the hypothesized ore shoots 90m deeper than any previous holes. Further drilling of an additional twelve holes, totalling ~2250m, that will test the extent of the gold mineralization along strike and improve sample density in the previously drilled zone to maximize confidence in resource estimation.

​​​​​​​The drilling has been planned very precisely with carefully thought out targets in order to provide the most useful results possible. Trenching has been carried out with a focus on the main ore zone. Further trenching in the periphery of the main ore zone may identify further ore shoots or zones. 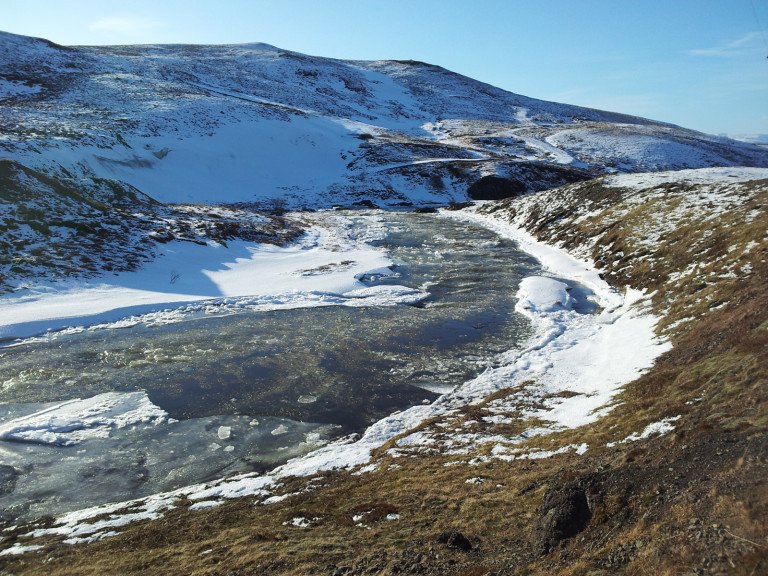 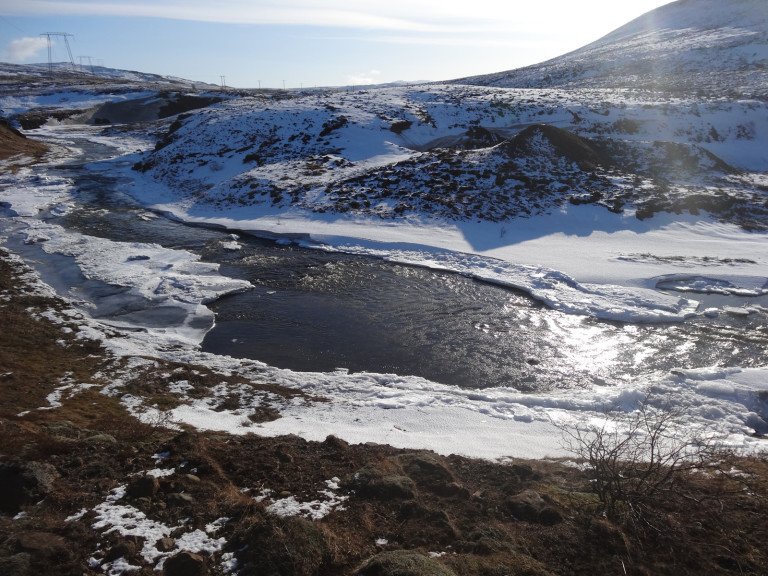 Julie - Canada
Julie is located within the mining-friendly province of Quebec, Canada. Nickel-copper-cobalt with some PGE discovered on the property in 1998. 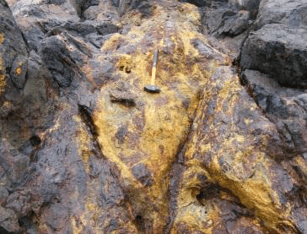 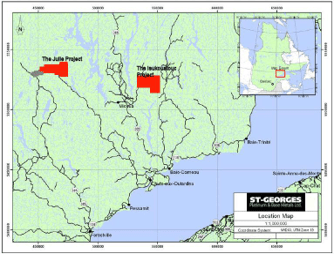